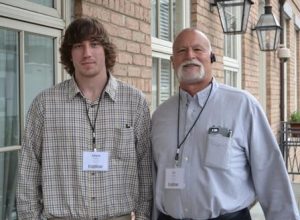 Under One Roof, like many of EcoStar’s rep groups, is a family affair. Ed Taylor and his son, Adam, have been working together for the last few years. Like anything else, working as a father/son team has its challenges along with its rewards. It takes discipline to separate the professional and personal aspects of their business, and working with family makes the highs higher and lows lower. But Ed has enjoyed watching Adam grow as he learns the business. What makes Ed and Adam such a great team? Maybe it’s that their differences complement each other. Ed and his wife, Robin, met at West Virginia University and were married after he received his MBA from Penn State. For the next two decades, Ed worked in the financial analysis/budgeting world before realizing he didn’t love being behind a desk. He started a manufacturer’s rep business with EcoStar as his main line, and it remains that way today.

What makes Ed and Adam such a great team? Maybe it’s that their differences complement each other.

Adam, on the other hand, thrives not on academics, but sports. Although Adam studied business in college, Ed likes to say he majored in hockey/partying with a minor in chilling out. And for Adam, this is a good thing. He’s got the personality, confidence and eagerness to be out in the real world. For anyone who knows Adam, you know his passion for hockey. He has played hockey for most of his life, leading his high school hockey team to multiple state championship finals, then playing junior hockey, followed by a year of hockey at UMBC. Adam still plays in a roller hockey league and does some occasional ice hockey tournaments with his friends. After working with his father part-time for a couple years, Ed offered to teach Adam the ins-and-outs of his business. Adam joined Ed full-time about three years ago. The Taylors both enjoy the dynamic nature of their jobs. They are able to meet and work with all kinds of people, and no two days are the same. Ed likes to share a recent conversation he had with an EcoStar customer: Ed:  “What’s the problem?” Lady:  “I have some dirt and mud up on my new EcoStar roof, and I was wondering what I should do? Is it OK to clean it off with water?” Ed:  “Uh, you mean, uh, water? “ Lady:  “Yes. I was wondering if that would hurt the roof?” Ed:  “Oh, uh, yeah. The water would be fine ma’am.” Ed said he was a bit speechless, but when he thought about it later, he said maybe he should’ve told her that she needed a new EcoStar roof every 6 months!  But as Ed said, “I do try to be honest in my dealings.” Outside of work, Ed has a number of hobbies that include weightlifting, swimming, leading a men’s Bible study group at church, maintaining a vegetable garden – most notably raising vegetables for fresh salsa to take to customers and neighbors. And believe us when we say the salsa is amazing! Ed also likes to cook and has always been involved in competitive sports. He just started playing pickleball after having to give up basketball, softball and racquetball a while ago. He was on the Maryland state championship bowling team when he was 13, was one pitch away from winning the first Maryland high school baseball state championship in 1975, and won the doubles intramural pool league and softball championship at West Virginia University twice. You can say the Taylor men like competition, which is probably what has made them so successful in sales! The Taylors enjoy working with EcoStar, which has always been Under One Roof’s main line. According to Ed, “We enjoy the family atmosphere of EcoStar and the work ethic and common sense they have, along with the honesty and straight forwardness that we have in our relationship.”

“We enjoy the family atmosphere of EcoStar and the work ethic and common sense they have, along with the honesty and straight forwardness that we have in our relationship.”

Ed and Adam, the pleasure is all ours!